If you want to know some Guanacaste beaches and wildlife in a different way
this is your tour! 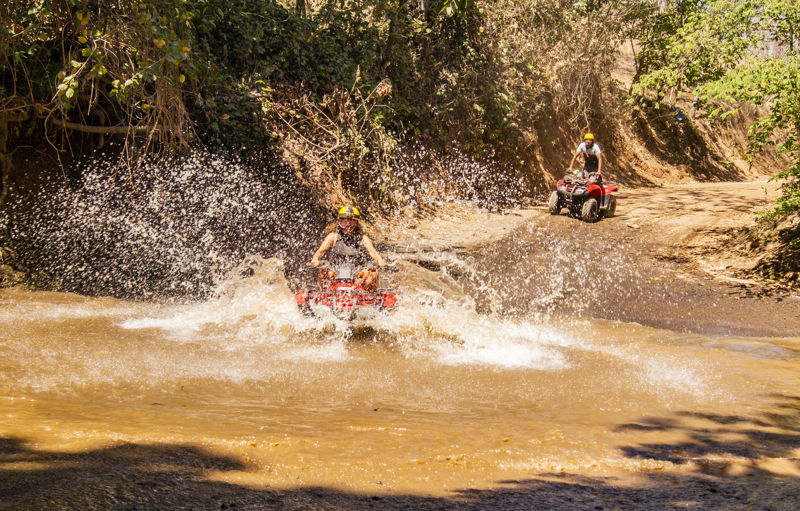 It departs from Huacas where three friendly tour guides will teach introduce themselves and teach you how the ATV’s work. Then you will be provided with googles and a helmet that, in case you want to record the adventure, can have a GoPro mount.
There is also the option to ride in a buggy car for four persons and they will also let you know how to drive it in case you need it.
The group was of around six persons from any kind. There were old people, couples, friends and of course me and my two colleagues.
When everything is set, you will be ready to go!
The ATV’s in a row are leaded by one of the tour guides (who is very experienced by the way) and in the middle there will be another two guides so don’t worry about getting lost or miss the group. 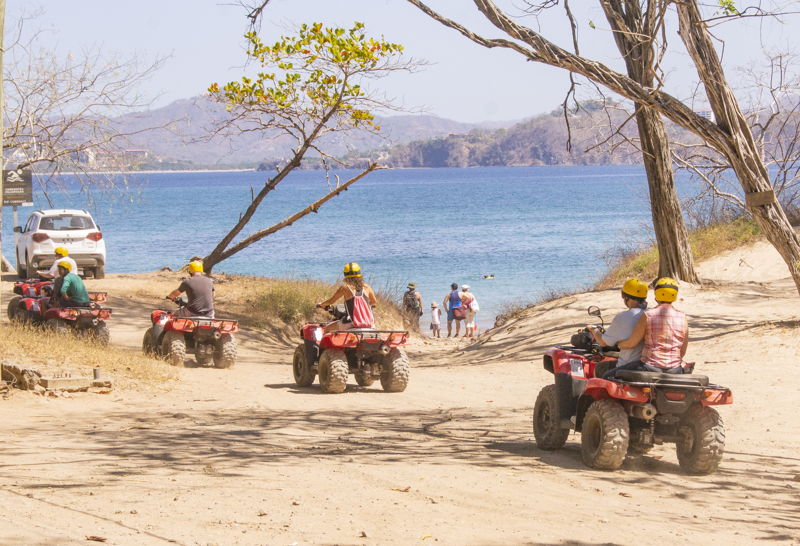 We start going through a dust road and yes, there are lots of it but is part of the adventure, isn’t it?
A small river was next so be ready to refresh your feet with some cool water. The tour continues between paddocks fenced with traditional wood and barbed wire inside whom are horses, cows, goats and different livestock that’s part of the local economy.
After 45 minutes of the tour we pass through grown plants that give the idea of some cool prehistorical woods!
A little bit later appeared in front of us the Majestic Minas beach, a treasure with turquoise water that welcomed us with some howling monkeys swinging in the trees.
The sand was very white and even had some recent big turtle tracks. About the sea, well, no words; the water was so clear that you can even see fishes swimming around your legs and if you want you can go and do snorkeling among the coral reefs.
Minas beach is surrounded by rock mountains with caves on it that resemble the ones you look in pirate movies. After some chilling time and exploring the place we continue with the ATV ride, next stop: Puerto Viejo beach.
It takes only like 15 minutes between one beach to the other. Puerto Viejo beach was spectacular as well, with a beautiful light blue sea and white sand. In this one there was more people: families spending its Sunday, couples on a romantic tropical date, groups of friends sharing a beer and an old man enjoying the incredible view of the bay.
Just a few steps from the sand there’s a little shack where you can get drinks, cocktails or some traditional food while talking with the exceptionally friendly people from the place.
After some refreshing drinks and some chat time we keep going with our experience! 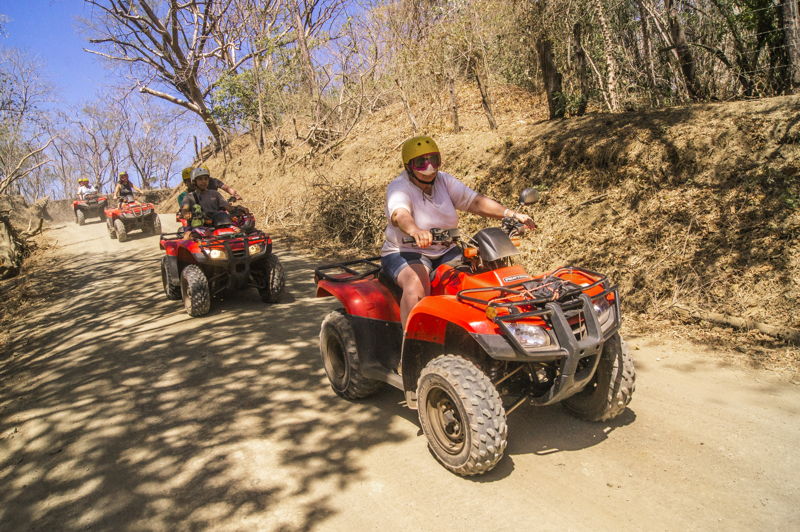 The returning route was different from the one we took at the beginning letting us explore more of this natural paradise and of its people. On the road we met what will be a local cowboy called “Sabanero” riding its horse and greeting us with a big smile while drowning his cattle.
Another river was ahead so water time again! This was a very enjoyed moment but the whole group because of the coolness of the water.
Sadly, the tour reached its end when we arrived the starting spot. There some fresh pineapple and water were waiting for us and were taken while everybody was talking about what they experienced in this tour.
Can’t wait to do this tour again and know other majestic places like the ones on this and I truly recommend you make it part of your agenda while visiting Guanacaste in Costa Rica.